People who read early drafts of SKINFLICKS told me I was going to make a lot of money with the book. And at first it looked like they were right.

In describing the sex action, I tried to avoid wallowing in graphic details, some of which—of course—were unavoidable.  Above all, I reminded myself that SKINFLICKS was not a pornographic book; it was a book about pornography.  I thought I did a good job of making the distinction.  So did the editor at Zebra Books, who examined every word.

Just as I was anticipating book tours, readings, book signings and maybe even an appearance on Oprah, the publisher dropped the book. Why? The reason—I learned—was a storm of bad publicity in the wake of Madonna’s book, Sex.  Publishers were afraid of anything remotely suggestive of pornography.  My agent, who had so quickly landed the Zebra Books contract, spent many months trying again to sell SKINFLICKS with no success. 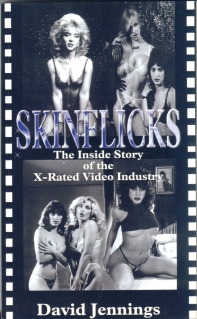 At least I got to keep the advance.

David Blander had had many careers. As a director, he made commercials for clients such as Magnavox, the State of Michigan, Clark Equipment and Amway. As a video engineer, his biggest accounts were the underworld porn kings who pioneered the home video revolution of the 1980s. When California legalized medical pot in 1996, he developed a trophy-winning strain that he distributed to northern California dispensaries—until Feds and local sheriffs busted his grow-op warehouses. Now retired, Blander is beginning another career: writing. Plato said, “An unexamined life is not worth living.” Blander’s professional history gives his life plenty to examine. View all posts by David Blander