Ron Jeremy had a great idea for a sex scene.  As he described it in Hustler:  “I’d like to do a hang-gliding scene in an X-rated film.  I see this great shot of me standing on a hill with my dick sticking straight out, hard as a rock.  Then I take off and start gliding downward.  There’s this gorgeous girl at the bottom of the hill pointing her little butt right at me.  The master shot would look as if I’m going to dive right into her ass at top speed.  But the final shot would cut to a camera zoom of my dick making a safe rear-entry landing right smack in the middle of her pussy.  I’d like to see James Bond do something like that.” (excerpt from  SKINFLICKS: The Inside Story of the X-Rated Video Industry) 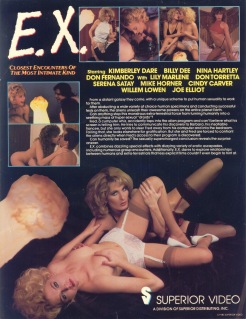 As absurd as Jeremy’s scenario sounds, it is indicative of how pornographers think.  In SKINFLICKS, I detail such pornographer’s brainstorms as sex in a vat of spaghetti and in a tub of chocolate; three-somes balancing precariously on toilets; prosthetic penises mounted in unusual places (Paul Norman’s Cyrano and Edward Penishands); scenes featuring octopus tentacles and snorkel cameras; and gang-bangs with one woman taking on up to one hundred men. When I produced E.X., I used my special effects generator to show aliens with three-foot-long members performing double-penetration on Lilly Marlene.

Regardless of how resourceful they are, pornographers are stuck with the fact that all sex scenes come down to the same half-dozen positions.  If the chemistry isn’t there, no director, regardless of competence, can make a scene sizzle.  On the other hand, when performers are hot for one another, even the dimmest of directors can end up with a great scene. Being at best skilled documentarians, pornographers hasten to proclaim their uniqueness.  (This was especially true when an avalanche of new titles descended upon the industry during the “smut glut” era of the late 1980s and early ‘90s.)  Thus, Scotty Fox, director of Ass Backwards and My Bare Lady, became porn’s “King of Comedy.”  The late Henri Pachard, famous for staging sex on bathroom fixtures, was dubbed “The King of the Commode.” With Shape Up for Sensational Sex, Gail Palmer declared herself “the Jane Fonda of porno.” The late Anthony Spinelli had no interest in directing sex, which he turned over to cameramen such as myself while he took a nap. Spinelli became famous for the miraculous acting performances he managed to wring out of even the most unmotivated of cast members. At Superior Video, my co-director Joe Farmer and I took pride in making low-budget videos look like more expensive ones (that special effects generator sure helped).

The downside of thinking like a pornographer is when it comes to dominate your outlook—especially when you’re cranking out one sexvid after another.  As veteran pornographer Bill Margold observed in a 1982 Adam magazine interview, “You can only live in a fantasy land just so long before it starts driving you crazy.”  When real life runs counter to that fantasy land, disaster beckons. “Pornographer’s disease” is another name for impotence.  My friend Ace Walker said that after he quit shooting and acting in porn, it took him two months before he could enjoy a normal sex life.  Actor Cal Jammer was not so fortunate. Said to obsess about his erections, he couldn’t recover from bouts of penis limpus. He wasn’t the only failed stud to commit suicide.

Thinking like a pornographer extends beyond those directly involved in production.  Superior Video’s receptionist Alana told me, “I can’t read Vogue (magazine) without thinking of the commercial possibilities.” She provided the idea behind our video Diary of a Bad Girl.